A Refashion From the Young Men's Department

Hello Readers. Do you ever wear men's or young men's clothing? I do it often. A friend recently gave me a ton of hand-me-downs for my son to grow into. You know I went through the bags and found some goodies for myself.
(I also proved how old and out out of touch I am. More on that later.) 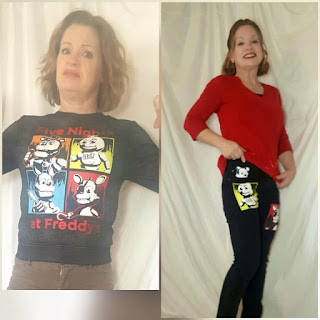 One of the first things I found was this sweatshirt. It looked so colorful and cute. I thought it was from a resort or vacation restaurant. It wasn't.
(I wasn't paying enough attention and I should use Google more. According to my older son, this shirt was actually referencing a video game. The game takes place at a kids arcade where the mechanical characters become possessed and come to life and try to kill the gamer. They get more scary looking as the game progresses. This shirt showed how cute they look at the beginning.) 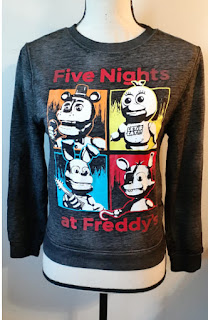 Foolish suburban mom that I had decided to use these cute little guys in a refashion project not knowing who they were. I had to cut the shirt up because the it was too small for me to wear. I cut out each little guy. 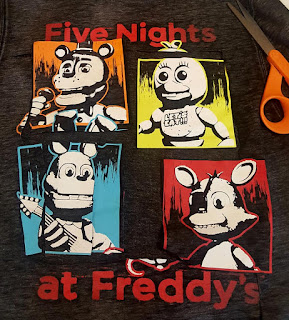 I put the little squares around these black jeans. Where did the jeans come from? They came from the bag of hand-me-downs! I had seen some jeans on Instagram recently with a lot of patches and I was inspired by them. I would have distressed them as well but it is really cold and windy today. It isn't a good time to have holes in my pants exposing skin to the weather. 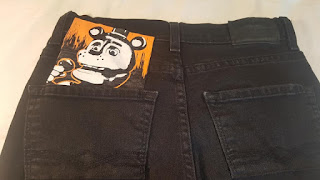 Here are my finished jeans. As I was taking these photos my older son walked in and asked, "Where did you get "Five Night's at Freddy's" jeans?" I said I had made them. He responded with a lot of loud laughter and asked "Do you know what those are?"
The answer was obviously no. I don't play video games. I have no idea what's what.
Now I am not sure how I feel about the jeans. Do I want to look like a super-fan of some possessed killer arcade characters? I'm not sure.

I also learned the the back pockets on young men's jeans is lower than I like. I had 3 pairs of identical jeans from those hand-me-down bags. I moved the pockets up to see if I liked it better with the pockets a little higher. 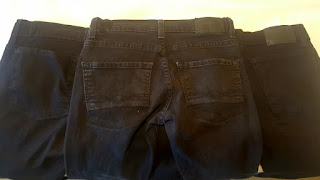 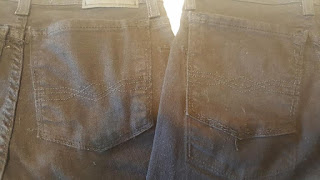 Thanks for reading along, now go make something fun for yourself.
And if it involves characters you don't know, use Google!
Posted by I Can Work With That at January 17, 2020

Oh my word I am laughing out loud. Not because of the super cute jeans but the game characters.

Hey Julie! My son got a good laugh out of it. I need to do more research on my refashion choices. haha
Chickie

OMG! You look great in these outfits.

Thanks so much.
Chickie