A Denim Dress from a Men's Shirt

Hello Readers. I got a quick burst of nice weather and wanted to make a dress. I started with this very large men's shirt. It said size 3X. It was in great shape and it was long enough for a cute dress. Really, I am half done already because the hem is finished. 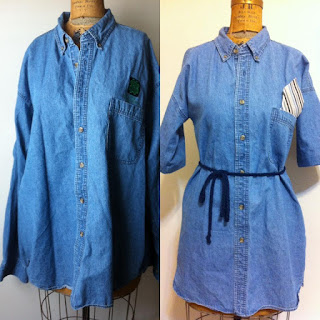 Here is the shirt before I did any cutting. You can't tell how long it is from the picture. It is long enough to make a tunic type of short dress. 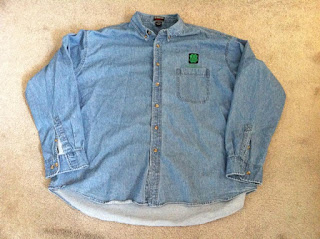 I used a dress I liked the fit of as a pattern of sorts. It gave me a basic idea of how big I wanted this dress to be. This button down shirt doesn't have any stretch. I added some extra to the measurements to make sure it would fit comfortably. 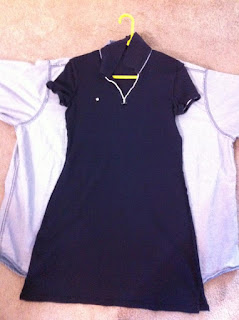 Here is the dress after cutting some off the sides and a lot off the arms. I made them 3/4 length sleeves and stitched the raw edge under. It looks longer in the back, but it just needs to be ironed. 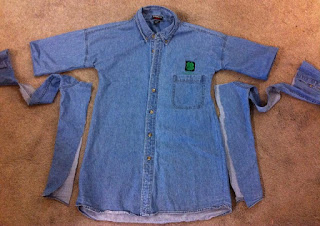 There is still one problem. This patch and logo above the pocket. It was too well sewn on to remove without a lot of damage. I had to cover it up. (I don't know where Clover Power Station is but I thank them for the new dress.) I had an idea about covering the logo patch. 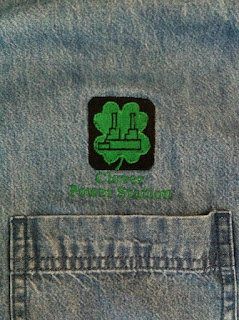 I added something to cover it. It is the wide end of my husband's tie. It had an ink stain on it so he never wore it. I attached it with a few hand stitches so it wouldn't shift around. You could just pin it as well. A big broach or pin would work too. I have a baby so pins don't work for me right now. He would lay his head on my shoulder and scratch his face or he would try to eat it. 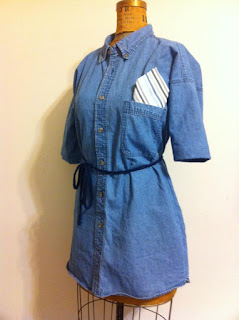 I also closed up the space between two of the front buttons. I just sewed on top of the seam that was already there. No one can tell I did anything to it but that way it won't gape open when I move around. I never used to wear button down shirts because of  the way the two sides can pull open when I am wearing the shirt. (YIKES!) Now, I just add a few stitches in between those buttons and I don't have to worry about how my shirt looks. It is permanently closed and now I have to pull the shirt on over my head. That's OK with me. 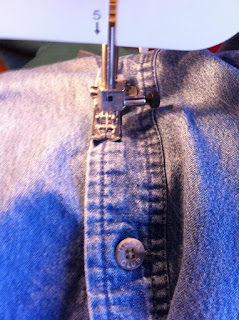 I was really happy with the way it turned out. It is great over leggings. 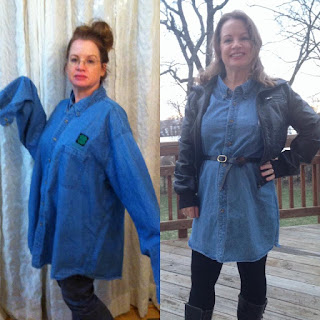 Thanks for reading, now go make something fabulous for yourself.

Well done! And that was one HUGE shirt!!

Thanks! It was a lot of fabric, I knew I could make it into something.

I LOVE your vision!! I wouldn't even contemplating doing something like that! You really are a true inspiration! Thank you! Hazel x

Thanks for the comment Hazel. I am glad to hear rom readers.
Chickie