Blue for the Red Sox

Hello Readers. I hope you are doing well where ever you are today. I am on furlow because of the Corona virus so I am home and trying to stay comfortable. That means T-shirts and I had one that needed help. This Red Sox shirt was too tight. It didn't really have any stretch either. But I like the Red Sox. I know baseball has been cancelled, like everything else but I am still a fan.
(*More about the Red Sox at the end of this post.) 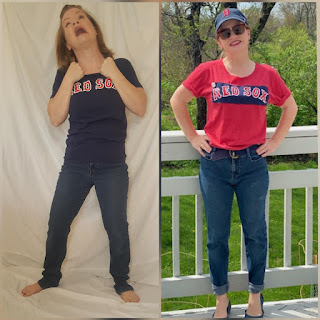 If the blue shirt is too tight, what can I do to fix it? I could have added fabric to the blue shirt to make it bigger. The part I liked was the team logo so what if I just removed that logo and added it to a different and larger shirt? 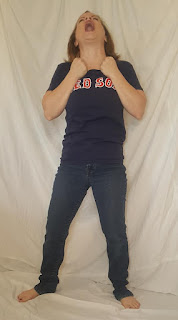 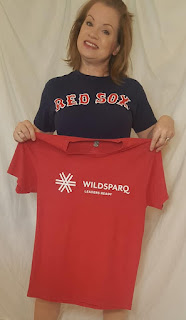 I cut the logo off in a rectangle shape. Easy! 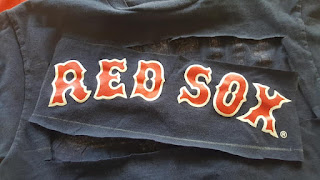 That blue piece will cover the corporate logo of this red shirt my daughter gave me. These freebie T-shirts are everywhere and great to use for refashions. 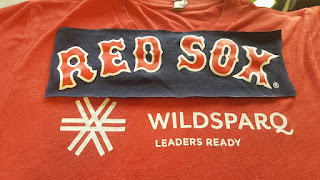 I wanted to stitch the rectangle on the red shirt and decided to add a button. Why the button? 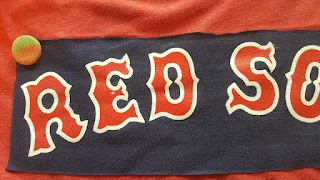 I wanted a little baseball button but I didn't have one. I painted the fabric button white and added the red stitches with a red Sharpie. 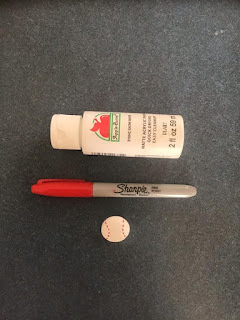 I thought the button and the red stitching added a nice touch to my T-shirt. 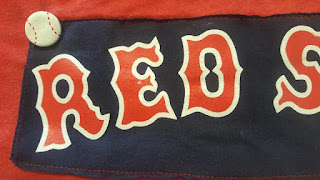 My baseball T-shirt was done and I liked it a lot. 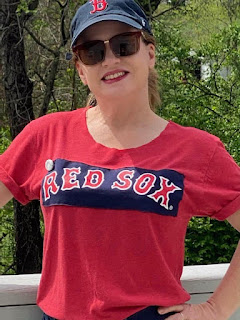 I wanted to make the jeans shorter and I wanted an uneven released frayed hem. I did some very messy cuts . 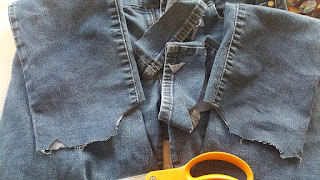 The jeans didn't fray like I thought they would. I just had jeans with a crazy uneven cut hem. 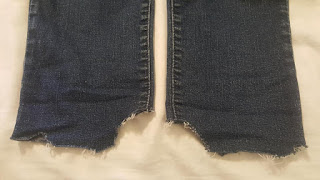 I rolled the jeans up to get a boyfriend jeans look. I was happy with that. I went for a walk around my neighborhood. I got caught in the rain and only wore this outfit for about 27 minutes. It was great while it lasted.

Thanks for reading along. And stay well.
*In October of 2004 I went to visit my brother and his family in Boston. It was an eventful trip. A lot of wild stuff happened; a car fire, a screaming fight in Faneuil Hall with a crazy lady who was scaring my kids, sweet tourists from Japan that didn't speak English but tried to help me, a broken stroller in the middle of a big crosswalk, a crazed sprint up the Bunker Hill Monument that gave my SIL a serous asthma attack, so much fun. It was my first time in Boston and it was the week of the MLB playoffs. The Red Sox had lost the first 3 of 7 games. The city was full of manic energy. We were downtown everyday to see the historical sights and enjoy the city. Everyone was obsessed with the game coming that evening. The statue of Paul Revere had been dressed in Red Sox clothing. Every shop and museum seemed full of nervous energy. There were signs in every window to support the team. After a day downtown we would watch the games in the evening. They had to win EVERY game after the third so we were glued to the TV screen. They won the last 4 games of the series (It was historical and enchanting.) and went to the World Series. They won that too. It was exciting and fun and I was pulled into the whole team spirit.

I never took you for a “BoSox” fan. Glad you explained it. Love the button, too!

Thanks Rian! I have always enjoyed watching games but that one trip to Boston changed my DNA somehow. haha
Chickie

This is what i did with my husbands favoriet last saturday. Thank voor your inspiring blog. Stay safe

Hello Geertje! Thanks for the comment. I hope your hubby's shirt turned out well.
Happy Sewing to you!
Chickie