The Jeans That Scared My Child 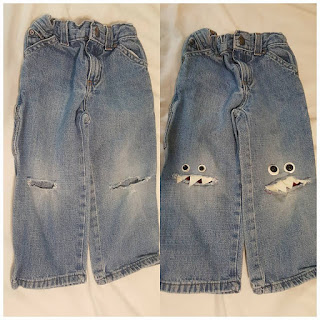 I got the jeans and some scraps of material and I got to work. The red would be the inside of the little monster mouths and the white would be little teeth.  I happily stitched the red cloth and the white "teeth" into the jeans from the inside. I wanted to fill in the holes to keep his little knees covered and warm. 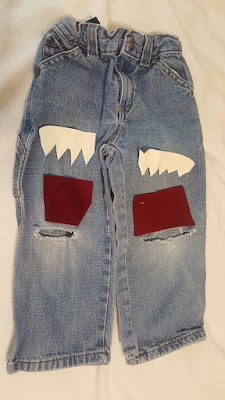 I got some black and white buttons and used them as eyes. My little monsters have a bit of an overbite, but I love them. They are so cute! All that was left was to give them to my little boy.
(Did I mention he is 2? He reacted as a typical 2 year old. He took one look at my project, made with love and he hated them. He hated them a lot.) 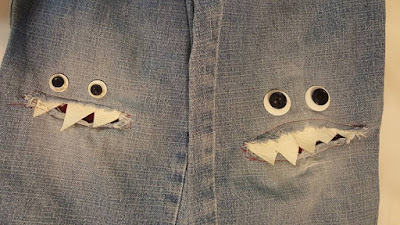 How could he hate these jeans? I made him try them on, thinking that when he got them on he would like them. NO! He started to take them off. I realized this whole project wasn't going to work out. I thought I would hang them in his room to look cute. I still had a little hope that this wasn't a huge waste of time and energy. My hopes were going to be crushed. 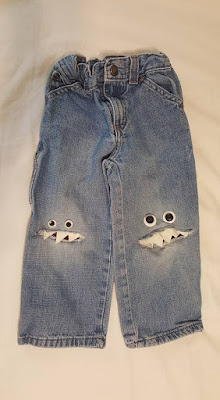 I later put him down for a nap and there was peace in the land. For about 5 minutes. Then there was screaming and crying. "The faces!" "I don't like the faces!" They were "looking" at him. He didn't like them looking at him. I had to take them away and hide them in my closet, I had to give him dozens of hugs and kisses and he eventually agreed to go to sleep.
So...I have some cute jeans with faces in a size 3T if anyone is interested.
Thanks for reading, now go make something fun, maybe not these jeans though.

*Year end update- Do I need to say it? My kid never got near these again. They are in my closet and he still hates them.
Posted by I Can Work With That at February 02, 2018

Oh Chickie... I think they're adorable! I just wish I'd have come up with that idea for when my own boys were that size. Hopefully the little guy isn't too traumatized. Keep up the good work :)

This is hilarious, except not for your son or you :) I'm sorry it didn't work out, but what a great story for the future! He might like something like this when he gets to be 7 or 8 - whatever age kids start to like dinosaurs.

Or maybe he'll never like dinosaurs. Maybe you have ruined dinosaurs for him forever!! Maybe you two are even now :)

Let me (as a mom of teens now) tell you what a wonderful thing you have made. Those are genius. My children are too big for those, but there is a kid who will see these and just whine until they get them.

So funny. The jeans are cute just apparently not to a two year old

Thanks for the comment Rebecca. He has not seen the monsters again and seems OK now. I will keep them hidden just to stay safe.
Chickie

Hi jenny_o
You're right he might be scared forever, of the faces his mom made him. Oops! Hopefully he gets over it eventually.
Chickie

Hello SJ, Thanks for the comment. You're right, some child somewhere really wants these. Just not mine. Oh, well.
Chickie

Hi garnet128,
Thanks for the comment. It is impossible to predict 2 year old tastes right? haha
Chickie